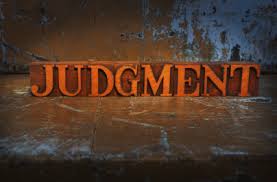 Judgement as defined by Webster’s Miriam online dictionary is defined as, an opinion or decision that is based on careful thought (simple definition).  Yet there is another definition in the Full Definition section it reads, a formal utterance of an authoritative opinion, or the process of forming an opinion or evaluation by discerning and comparing.  While reading various posts yesterday on Social Media, here were some that I felt passionate about and I posted my comments, others I just viewed and shook my head.  What I found interesting in many of the topics I viewed, almost immediately the posters deviated from the topic of the post to judging the writer of the other poster’s comments.  One topic that has been and I suspect will always be a subject of spirituality and religion to which some folk show a depraved indifference to the idea that what they believe is the only true form that they will verbally insult anyone who disagrees.  If you have never been hit in the head by a rock or a shoe, try reading some posts about religion and surely you will get a sense of the pain and anguish being hit in the head must feel like.

Sure, I have my biases when it comes to my faith and my trust in the one true God, however, I have learned to practice the idea of tolerance for others to point of not engaging in the “who’s right” comparative dialogue.  Albeit I shake my head and think to myself, “if you don’t believe in the God I choose to serve, why the need to attack me or other folk based on their belief system.”  The scripture states, “King James Version (KJV 1769) — Be sober, be vigilant; because your adversary the devil, as a roaring lion, walketh about, seeking whom he may devour.  We have all heard and read (or perhaps not) this scripture, what I want to focus on today is the word, may.

The definition of “may” is, have the ability to:  have permission to <you may go now>:  be free to <a rug on which children may sprawl — C. E. Silberman> —used nearly interchangeably with can —used to indicate possibility or probability <you may be right>.  What comes to mind is that the enemy is not walking or lurking about devouring folk by persuasion, but the he is looking for folk who he may.  That means that not everyone is subject to his lurking.  Let’s suppose I were to retaliate verbally at every poster’s comment that went against my belief system, I would open myself up to be devoured by the spirit of judgement.  Offering my counter points to every comment would cause me to stand in judgement of the freedom of others’ beliefs…

This is now the second letter that I am writing to you, beloved. In both of them I am stirring up your sincere mind by way of reminder, that you should remember the predictions of the holy prophets and the commandment of the Lord and Savior through your apostles, knowing this first of all, that scoffers will come in the last days with scoffing, following their own sinful desires. They will say, “Where is the promise of his coming? For ever since the fathers fell asleep, all things are continuing as they were from the beginning of creation.” For they deliberately overlook this fact, that the heavens existed long ago, and the earth was formed out of water and through water by the word of God, …

“Upon descending our threaded words on the web by a steep and hazardous precipice of readers requires constant review.” View all posts by MsConcerned