when #office and #wealth become the gods of a people, and the most unworthy and unfit most aspire to the former, and fraud becomes the highway to the latter, the land will reek with falsehood and sweat #lies and chicane. (Albert Pike) 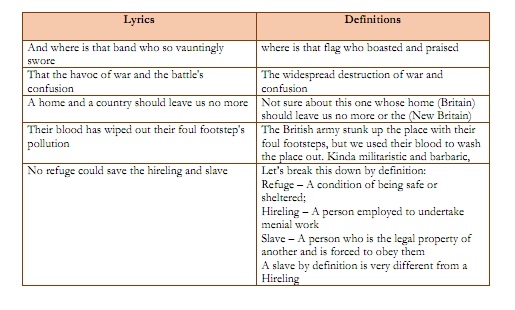 Just a month after the British had burned the White House during the height of the War of 1812, Key was aboard a British vessel negotiating the release of a friend who was being held prisoner. During Key’s time aboard the vessel, the British commenced an attack on Fort McHenry, and the pair was not allowed to leave. So Key and his friend watched from the ship as the British bombarded Fort McHenry.

There are historians (notably Robin Blackburn, author of The Overthrow of Colonial Slavery, 1776-1848, and Alan Taylor, author of “American Blacks in the War of 1812”), who have indeed read the stanza as glorying in the Americans’ defeat of the Corps of Colonial Marines, one of two units of black slaves recruited between 1808 and 1816 to fight for the British on the promise of gaining their freedom. Like so many of his compatriots, Francis Scott Key, the wealthy American lawyer who wrote “The Star-Spangled Banner” in the wake of the Battle of Fort McHenry on 14 September 1814, was a slaveholder who believed blacks to be “a distinct and inferior race of people, which all experience proves to be the greatest evil that afflicts a community.” It goes without saying that Key did not have the enslaved black population of America in mind when he penned the words “land of the free.” It would be logical to assume, as well, that he might have harbored a special resentment toward African Americans who fought against the United States on behalf of the King. 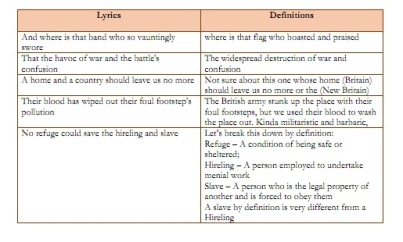 Rosa Parks is well-known for her refusal to give up her seat to a white passenger on a public bus in Montgomery, Ala., in December 1955.

Claudette Colvin was just 15 when she refused to give up her seat on a segregated bus in Montgomery, Alabama. It was nine months before Rosa Parks’ act of defiance in 1955.  But Parks’ civil rights protest did have a precedent: Fifteen-year-old Claudette Colvin, a student at a black high school in Montgomery, had refused to move from her bus seat nine months earlier. However, Colvin is not nearly as well-known, and certainly not as celebrated, as Parks.

“[The bus driver said], ‘Give me those seats,'” Colvin recalled. “Three of the girls got up and moved. But I remained seated.”

Colvin said she drew her strength from African-American abolitionists she had just learned about in school.

Who are the Americans

Let’s be clear; folks came to this place called New Britain raped, plundered and killed the inhabitant (Native Individuals) and claimed property.  Then the grandfathers of the new land now known as America came and tried kill some of the people who left Britain, they lost and went back home but not without maintaining a great deal of authority and huge percentage tax of the dollars made here in this new land. For example – the Boston Tea Party happened as a result of “taxation without representation”, yet the cause is more complex than that. The American colonists believed Britain was unfairly taxing them to pay for expenses incurred during the French and Indian War. Additionally, colonists believed Parliament did not have the right to tax them because the American colonies were not represented in Parliament.

With a that said it still amazes me that black folk think this is their land and they have any rights to anything other than what is not needed by the folks who own “…this land is NOT your land.”  We still perpetuate the Rosa Parks story as if Claudette never existed. Which brings me to another point, the same way we dismiss Claudette who was too black, too pregnant and not married enough – we embrace this behavior today in 2016 as the commenter asked Cornell, “why don’t you use 2016” – well there is it.  We still look down of folks who have not come out of the projects; we shun folks who are not part of our cults, and we even shut our family members out when folks of another seem to embrace us.

Last note:  If your new found friendship with an elitist group embraces you if they are “true”,  they will embrace all of you, your illegitimate brother and sisters, jail-bound nephews, drug addicted aunts and uncles, holier than thou religious freaks, and the “plano” simple family member who could care less about degrees and dollars! But you see that won’t happen especially when  #office and #wealth become the gods of a people, and the most unworthy and unfit most aspire to the former, and fraud becomes the highway to the latter, the land will reek with falsehood and sweat #lies and chicane. (Albert Pike)

So many seemingly trivial Interactions between two people present us with a Choice. Do we act with compassion or do we pass up that opportunity. 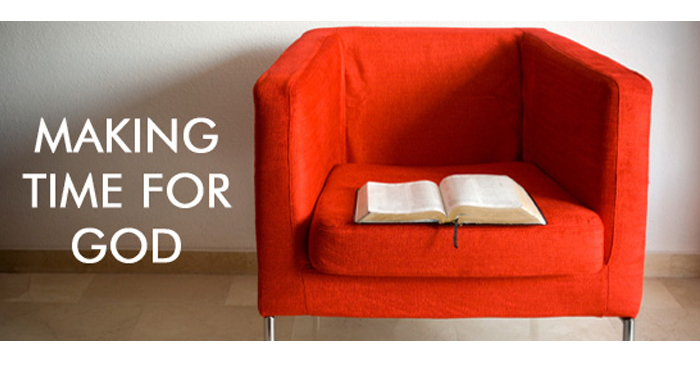 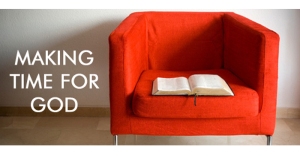 At the prodding of my friends, I am writing this story.  My name is Mildred Honor. I am a former elementary school Music Teacher from Des Moines, Iowa.

I have always supplemented my income by Teaching Piano Lessons … something I have done for over 30 years. During those years, I found that children have many levels of musical ability, and even though I have never had the prodigy, I have taught some very talented students. However, I have also had my share of what I call ‘Musically Challenged Pupils.

One such pupil was Robby. Robby was 11 years old when his Mother (a Single Mom) dropped him off for his first Piano Lesson.

I prefer that students (especially boys) begin at an earlier age, which I explained to Robby.  But Robby said that it had always been his Mother’s dream to hear him play the piano, so I took him as a student.

At the end of each weekly Lesson he would always say ‘My Mom’s going to hear me play someday.’  But to me, it seemed hopeless; he just did not have any Inborn Ability. I only knew his Mother from a distance as she dropped Robby off or waited in her aged car to pick him up.  She always waved and smiled, but never dropped in.

Then one day Robby stopped coming for his Lessons.  I thought about calling him, but assumed that because of his lack of Ability he had decided to pursue something else.  I was also glad that he had stopped coming. He was a bad advertisement for my teaching!

Several weeks later I mailed a flyer recital to the students’ homes. To my surprise, Robby (who had received a flyer) asked if he could be in the recital. I told him that the recital was for current pupils and that because he had dropped out, he really did not qualify.

He told me that his Mother had been sick and unable to take him to his piano lessons, but that he had been practicing.  ‘Please Miss Honor, I’ve just got to Play,’ he insisted. I don’t know what led me to allow him to play in the recital – perhaps it was his insistence or maybe something inside of me saying that it would be all right.

The night of the recital came and the high school gymnasium was packed with parents, relatives and friends. I put Robby last in the program, just before I was to come up and thank all the students and play a finishing piece. I thought that any damage he might do would come at the end of the program and I could always salvage his poor performance through my ‘Curtain Closer’.

Well, the Recital went off without a Hitch, the Students had been practicing and it showed.  Then Robby came up on the stage. His clothes were wrinkled and his Hair looked as though he had run an egg beater through it. ‘Why wasn’t he dressed up like the other students?’ I thought.  ‘Why didn’t his Mother at least make him comb his Hair for this Special Night?’

Robby pulled out the piano bench, and I was surprised when he announced that he had chosen to play Mozart’s Concerto No.21 in C Major.  I was not prepared for what I heard next.   His fingers were light on the keys; they even danced nimbly on the Ivories.  He went from Pianissimo to Fortissimo, from Allegro to Virtuoso; his Suspended Chords that Mozart demands were magnificent!  Never had I heard Mozart played so well by anyone his age.

After six and a half minutes, he ended in a Grand Crescendo, and everyone was on their feet in Wild Applause!!!  Overcome and in Tears, I ran up on stage and put my arms around Robby in Joy.

‘I have never heard you play like that Robby, how did you do it?’  Through the Microphone Robby explained:  ‘Well, Miss Honor, Remember I told you that my Mom was sick?   Well, she actually had Cancer and Passed Away this Morning.  And well… she was Born Deaf, so tonight was the first time she had ever heard me Play, and I wanted to make it Special.’

There wasn’t a Dry Eye in the house that evening.  As People from Social Services led Robby from the stage to be placed in to Foster Care, I noticed that even their Eyes were red and Puffy.  I thought to myself then how much Richer my Life had been for taking Robby as my Pupil.

No, I have never had a Prodigy, but that night I became a Prodigy … of Robby. He was the Teacher and I was the Pupil, for he had taught me the meaning of Perseverance and Love and Believing in Yourself; and may be even taking a chance on someone and you didn’t know why.

Robby was killed years later in the senseless bombing of the Alfred P. Murray Federal Building in Oklahoma City in April, 1995.

A Footnote to the story: If you are thinking about forwarding this message, you are probably wondering which People on your address list aren’t the ‘appropriate’ ones to receive this type of message. The Person who sent this to you believes that we can all make a Difference!!!

So many seemingly trivial Interactions between two people present us with a Choice. Do we act with compassion or do we pass up that opportunity.

You Now Have Two Choices:
1. Delete this; OR
2. Forward it to the People you care about.  You know the choice I made.

Thank you for reading this!!  May God Bless You Today, Tomorrow and Always.

If God didn’t have a Purpose for us, we wouldn’t be here!