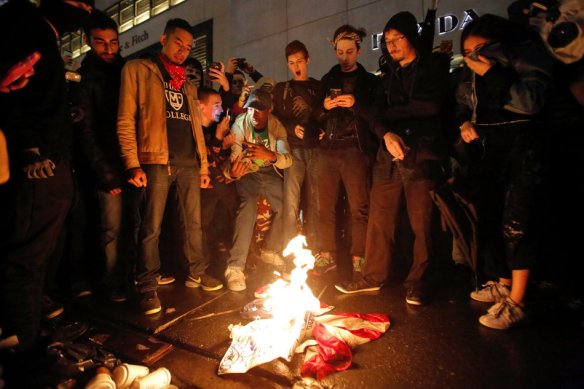 Judge Tells New Citizens They Can Leave The U.S. If They Don’t Like Donald Trump “He will be your president and if you do not like that, you need to go to another country.”

A Federal judge presiding over a naturalization ceremony in San Antonio, Texas, on Friday told new U.S. citizens if they didn’t like President-elect Donald Trump, they could leave the United States.

Judge John Primomo – The Role of Federal Judges: Their Duty to Enforce the Constitutional Rights of Individuals? When did Judge Primomo decide to change his role?

What is Judge John Primomo’s record:

Carlos Cortes pleaded guilty to one count of failure to file a 2009 tax return on April 21. According to court documents, Cortes is an artist who works in the medium of Faux Bois, an artistic imitation of wood or wood grains in various media. His work has been commissioned by the city of San Antonio along with several San Antonio businesses.

Petitioner Guadalupe Ramirez, Jr. (“Petitioner”) Jan. 15–A lawsuit against the Kerrville Police Department will go to trial March 28. In a memorandum issued Tuesday, federal Magistrate Judge John W. Primomo denied a request Tuesday for a summary judgment for plaintiff Rachel Wood.  After the video was made public, questions arose as to whether Wood fell or tripped herself over a curb. The fall knocked out six of Wood’s teeth and required surgery, costing her more than the $35,000 named in the suit, Ellison said in July.

A summary judgment allows the court to dispose of a case without a trial when facts aren’t in dispute.

On this date, the Court considered the Memorandum and Recommendation filed by Magistrate Judge John Primomo and Plaintiff’s objections thereto, concerning Plaintiff’s application for a writ of habeas corpus, pursuant to 28 U.S.C. § 2254, challenging a state prison disciplinary sanction. After careful consideration, the Court ACCEPTS the Magistrate Judge’s recommendation and DISMISSES the case.

Petitioner Mike E. Dossett, Jr. seeks to challenge a jury conviction of murder in Texas state court in which he claims that his substantive due process rights were violated. Petitioner alleges that (1) his attorney rendered ineffective assistance of counsel, (2) the evidence was insufficient, (3) there was no chain of custody for the sexual assault kit used as evidence, (4) extraneous offence evidence was improperly admitted, (5) the prosecution failed to produce evidence favorable  [*2] to the defendant, (6) his conviction was obtained in violation of his right against self-incrimination, (7) his conviction was obtained by the use of a coerced statement, and (8) cumulative errors violated due process and his right to a fair trial. Petitioner asks the Court to provide declaratory and injunctive relief.

OVERVIEW: The inmate claimed he was entitled to release due to his good time and work credits under the mandatory supervision and parole rules and claimed that he was being forced to perform manual labor in violation of the involuntary servitude provision of the Thirteenth Amendment. The court determined that the inmate was correct that he was eligible for mandatory supervision under Tex. Gov’t. Code § 508.149. However, he was not entitled to release, as this decision was left to the discretion of the parole board. The inmate could not claim a constitutional violation based upon his disagreement with the parole board’s decision. The inmate could not use a federal habeas application to challenge this determination. The court found the inmate’s claim that he was being subjected to involuntary servitude was without merit, as he had been duly convicted and sentenced and Texas law clearly provided Texas prison officials with the ability to force inmates to perform manual labor.

“I can assure you that whether you voted for him or you did not vote for him, if you are a citizen of the United States, he is your president,” Judge John Primomo said, according to KENS 5. “He will be your president and if you do not like that, you need to go to another country.”

From the start of his presidential campaign, Trump made attacking immigrants a central component of his candidacy. He called Mexican immigrants rapists and criminals and pledged to ban all Muslim immigrants from entering the U.S. On Friday, he announced he would nominate Sen. Jeff Sessions (R-Ala.), a staunch anti-immigration hardliner, as his attorney general.

Primomo told KENS 5 that his comments were intended to be unifying and that he meant them to be respectful to the office of the president. He also criticized demonstrators who have been protesting Trump since he was elected on Nov. 8. Since the election, there has also been an uptick in attacks on minority groups in the United States, according to the Southern Poverty Law Center.

The most hopeful comments at the San Antonio ceremony came from the immigrants who were becoming citizens for the first time.

“The essence of Americans is that you have the right to vote and choose [who] to represent you,” Rafael Guerra, a new U.S. citizen who was born in Mexico, told the station.

Trump said on Sunday he would immediately deport 2 to 3 million people when he took office. Such a plan could require immigration raids.

1 thought on “Why Are They Always telling American Citizens – “Go Home?”