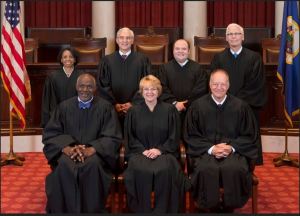 The stories of six federal judges, who overcame various obstacles on their paths to the bench, are highlighted as part of the U.S. courts’ observance of Women’s History Month.

In video interviews, the judges recount how they overcame challenges while growing up and then pursuing careers in the law. The videos are part of the courts’ “Pathways to the Bench” series.

The profiled ‘Pathways’ judges are:

An increasing number of women have joined the legal profession. Since 1992, women’s representation in law school classes has approached 50%. Despite record numbers of female judicial nominees and confirmations, the percentage of female federal judges, however, is far lower. It is of critical importance to increase the representation of women on the federal bench.

When women are fairly represented on our federal courts, those courts are more reflective of the diverse population of this nation and women, and men, may have more confidence that the court understands the real-world implications of its rulings. The increased presence of women on the bench improves the quality of justice: women judges can bring an understanding of the impact of the law on the lives of women and girls to the bench, and enrich courts’ understanding of how best to realize the intended purpose and effect of the law that the courts are charged with applying. For example, one recent study demonstrated that male federal appellate court judges are less likely to rule against plaintiffs bringing claims of sex discrimination, if a female judge is on the panel.

President Obama has appointed 138 female judges – more than any President to date. But to obtain true gender diversity, the number of women in the federal judiciary, including the Supreme Court, must be increased.