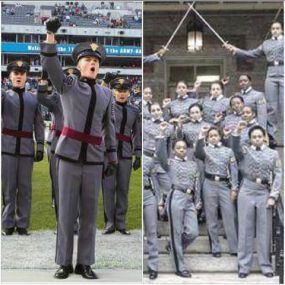 For  those of you who do not know –  Black Lives Matter (BLM) is an activist movement,  that campaigns against violence toward black people. BLM regularly organizes protests around the deaths of black people in killings by law enforcement officers, and broader issues of racial profiling, police brutality, and racial inequality in the United States criminal justice system.

Why does this matter you ask? For a variety of reasons:

What is the purpose of the Military – To defend our country from potential threats, hurt, harm or danger.

What is taught at West Point – “The United States Military Academy’s mission is to educate, train and inspire the Corps of Cadets so that each graduate is a commissioned leader of character committed to the values of Duty, Honor, Country and prepared for a career of professional excellence and service to the nation as an officer in the United States Army.

The Academy provides a superb four-year education, which focuses on the leader development of cadets in the academic, military, and physical domains, all underwritten by adherence to a code of honor.”

West Point’s Comparative Politics Program (excerpt) – The West Point Comparative Politics Program provides cadets with the intellectual tools and knowledge of core theories and concepts to better understand why some states fail and others remain stable.  Cadets have the opportunity to view critical comparative politics issues in a multi-perspective manner by taking related courses both in and out of the department.  After mastering the core concepts, cadets can tailor their program towards a regional (e.g., Africa, Middle East, etc.) or functional (e.g., negotiation, democratization, post-conflict stabilization, etc.) focus. The comparative politics courses and related electives provide cadets with the knowledge and framework to apply the core concepts and theories to relevant case studies and issues.

On the American side of Social Science –Students also consider processes such as political leadership, voting and group behavior. Strong emphasis is placed on the unique, and what some might consider exceptional ‘soldier-state’ civil-military relationship in the American experience.

The West Point American Politics program provides students with a solid understanding of the fundamentals of political science theory and practice in the context of American Governance.

In this writer’s opinion the aforementioned students were provided an outstanding education (not to mention the prerequisites for entry) which has prepared them to understand the political arena and socioeconomic development or lack of as a Cadet, as a Woman, Black Woman and now as a member of an organization designed to create and foster character.

Surely if they exhibited any other traits and/or behaviors that did not align with the mission, vision and values of West Point they would not have achieved the title of “Cadet”.

“To educate, train, and inspire the Corps of Cadets so that each graduate is a commissioned leader of character committed to the values of Duty, Honor, Country and prepared for a career of professional excellence and service to the Nation as an officer in the United States Army.”